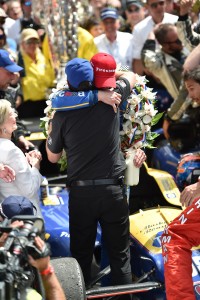 May 29 is a day that will be etched in the back of Bryan Herta’s mind forever. On that day in 2011, Dan Wheldon drove the No. 98 Honda to victory circle at the 100th Anniversary (95th Running) of the Indianapolis 500-Mile Race. Sunday – May 29, 2016 – rookie driver Alexander Rossi was the first to cross the yard of bricks in front of a sold out crowd for the 100th Running of the Indianapolis 500.

Rossi started the 200-Lap race from the 11 position, the best qualifying rookie in the field. During Lap 106 the NAPA AUTO PARTS/Curb Honda recorded the fastest lap of the race and on Lap 122 the rookie led his first lap at the iconic Indianapolis Motor Speedway.

Suffering through a couple slow pit stops and falling as far back in the field as 29th, the Andretti Herta Autosport team played off strategy for a bit, knowing the car was good enough to win. If you listened on the radio, you were able to hear Herta give the rookie near impossible fuel numbers to hit while saying, “If you can hit this number, you can win this race. You just have to try to hit this number.”

Rossi fought his way through the field lap by lap. While other cars pitted for fuel, the No. 98 car stayed out. With just three laps to go, the team was back to the No. 1 position. The next car on the lead lap was about a half-lap back when the NAPA AUTO PARTS/Curb machine started to run out of fuel on the last lap. Alexander Rossi crossed the bricks coasted across the finish line, claiming his first ever Verizon IndyCar Series win at the biggest race of the century.

The excitement in the pit box at the end of the race was indescribable as you heard Herta say over the radio to Rossi “You just won the Indianapolis 500, baby!” The crews of the additional Andretti Autosport drivers also came down to join in the celebration.

The California-native became the 10th rookie in Indianapolis 500 history to win the race and the first since Helio Castroneves in 2001. He was the first rookie to cross the finish line in first since Louis Meyer in 1928. He became a Verizon IndyCar Series winner in just his sixth race and the first to win a race in his debut season since Carlos Huertas in 2014. Rossi recorded both the fastest lap (Lap 106) and slowest lap (Lap 200) of the race.