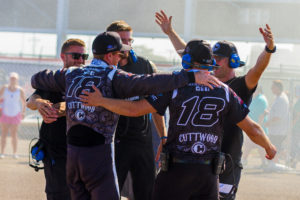 Atlantic City, NJ (August 28,2016) Patrik Sandell earned his fourth podium of the season and a back-to-back second place finish for the Bryan Herta Rallysport team for Round 9 of the Red Bull Global Rallycross 2016 season. Sandell coasted to the Final with a third place finish in Qualifying, fourth in Heat 1A, third in Heat 2B and a third place finish in Semi-Final B.  Using a different race strategy from the rest of the Supercar field, the No. 18 Cuttwood Ford Fiesta ST went from fifth to second position on the final laps of the Final due to a strong strategy and car.
“It was a good race.” Said Sandell, “A rough start in the final especially after the first lap because I was like a ping pong ball in between all cars hitting me at the beginning. Then after a few laps we were able to get to fourth or fifth position. Everyone took the joker and it was such a big time difference of 4.5 seconds, so my spotter Mattias kept giving me feedback on where we were and we kept gaining time all the way through the Final, so we took the joker and in the end were able to go form fifth to second on that strategy. Overall, I’m super happy with second and Bryan Herta Rallysport did a fantastic job. ”

Currently fourth in the Championship race with 352 points after this weekend, just 5 points behind third position. The team has a two-week break until Round 10 in Seattle, WA at Evergreen Stadium. Then another three week break until Rounds 11 and 12 in Los Angeles, CA for the 2016 season finale.