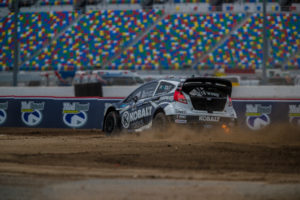 Daytona, FL (June 19, 2016) Rounds 4 and 5 of the RedBull Global Rallycross 2016 season resulted in two eighth place finishes on the weekend. Sandell earned the pole position in Qualifying and Heat 1A, a second position in Heat 2A and third position in his Semi-Final for Saturday’s races. Although the No. 18 Kobalt Tools Ford Fiesta ST was able to maneuver through the field from fifth to second position, contact with the lead car caused a premature race finish.

“Good day qualifying P1 for the first time this year, so I was really happy with the performance of Bryan Herta Rallysport,” said Sandell. “We were really fast on the track throughout the day. For the Final we had a good start, made it up to third after a few corners, then were able to take on second position after the joker. We were hunting down the leader and then made contact after he spun in front of me. My team did a fantastic job putting my car back together for day two in Daytona, so I am very pleased to work with Bryan Herta Rallysport, Ford Performance, Kobalt Tools and Cuttwood.”

The Bryan Herta Rallysport crew worked through the night to prepare the car for Round 5, but misfortunes continued as the team worked to find the speed the car had from the previous day.  The Bryan Herta Rallysport crew started the day in the top six for Qualifying, a fourth place finish in Heat 1, then were able to coast through to the Final with a third position finish in Semi-Final B. A red flag at the start of the Final caused a restart. Immediately after the restart Sandell got hit from behind, which lead to a right rear punctured tire and an eighth place finish.

The team looks forward to advancing further in the RedBull Global Rallycross Championship race at the New River Marine Corps Air Station in Jacksonville, North Carolina for another doubleheader weekend on July 2nd and 3rd.