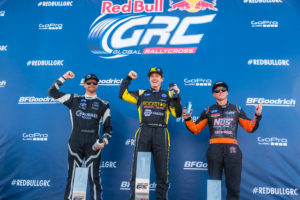 Phoenix (May 23, 2016) Bryan Herta Rallysport and the No. 18 Kobalt Tools Ford Fiesta ST showcased the hard work the team put into the offseason by achieving a second and fourth place finish in the first two rounds of the RedBull Global Rallycross season in Phoenix. Extreme desert winds created some setbacks, but provided no match for what the team and Sandell achieved during the doubleheader weekend.
Round one, the team started on pole for qualifying and continued to dominate until a broken gearbox caused Sandell to sit out Heat 2. The Bryan Herta Rallysport crew was able to work together to put out another quick car for a second place finish in Semi-Final B allowing Sandell to grasp a second place finish in the final.
Round two of the weekend, Sandell cruised through to the finals with a second place finish in Heat 1 and Semi-Final B. The team ended the weekend with a fourth place finish in the finals.
“As a team, we are very good at finding a really good setup and a really fast car very quickly, but when we have a doubleheader normally people start to catch us the second day,” Sandell said. “We need to figure out how to take that second step during the weekend to be able to stay on top. Super happy with second on the first round, disappointed with fourth in the second one because we had more speed, but I was held back and there was nothing you can really do. You can’t run through a car, I’ve tried and it didn’t work. Overall good start for the championship, much better start to this year than last year, so we’re in the game.”